Humanity has been betrayed

In the book “The Matrix Reality” – Man is a mind controlled intellectual robot who lives in a programmed reality – page 45 – mentions briefly what happened after the end of World War II.

A destructive extraterrestrial race from Betelgeuse in Orion’s belt stands behind the rapid technological development that has been going on since the 1950s on earth – this while the inner quality of man has not evolved considerably, viewed from an ethical-moral point of view. Egoism, lust for power, greed, hatred, jealousy, vanity, happiness, etc. are still dominant in most people on earth.

The same destructive alien beings provided the former Hitler Germany with technological knowledge in the 1940s, and are now behind our rapid technological development. This we have described in our latest book: “The Matrix Reality” (not yet translated to English).

All drawings related to laser technology, long-distance robots, jet aircrafts and the manufacturing of nuclear bombs were seized by the US and the former Soviet military during the final stages of World War II. This became the source of military and technological warfare and the cold war between the superpowers, the Soviet Union and the United States.

For those who do not know about history, it may be good to know that after the 2nd World War there was a vacuum between the US and the Soviet Union. This vacuum was called the “cold war”. Both the United States and the Soviet Union wanted to build a strong military force to take over the world domination of humanity on earth.

In connection with this, a delegation of the “Intergalactic Council” from the Pleiades, contacted the US delegation with President Eisenhower at the head the 20-21 of February 1954 at Edwards Air Force Base in California. 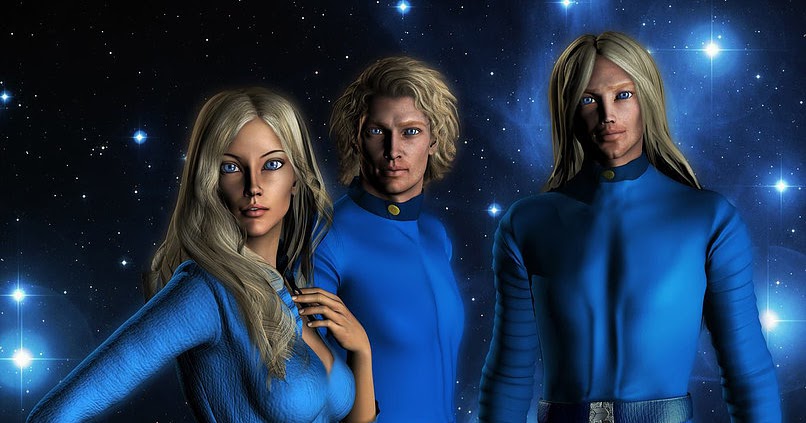 The Pleiadian delegation offered an agreement with the US government to contribute to the spiritual and ethical, moral development of the earthly civilization. As a counter-claim, they wanted the United States to remove anything that had to do with nuclear weapons and nuclear technology, which they considered to be a threat to the protection of the earthly civilization.

The Intergalactic Council would also help with technological knowledge adapted to the environment and nature of the planet earth and its human development. They also warned the US delegation not to have any contact and cooperation with Orion’s destructive alien beings, who they knew would contact them later. These Orion beings were thus the same destructive alien beings that were previously involved in Hitler’s Germany.

The next meeting a few months later the US delegation met with the destructive gray extraterrestrial beings at the Holloman Air Force Base in New Mexico.

The destructive alien beings offered high alien technology and in return they demanded to conduct biological research, experiments on a limited number of earthly people.

They also requested underground bases to be built for them where they could conduct their biological experiments and interact with different researchers in order to adapt their high technology to their society. This was approved by the US military and government with President Eisenhower in the lead. A cooperation agreement was signed between these destructive alien beings and the US administration.

All this occurred behind the backs of the American people and the population of the earth. All knowledge about the existence of these aliens and the cooperation that was established was classified by the DIA, FBI, and later by the CIA, NSA and NASA. Everything regarding the extraterrestrial presence was classified as conspiracy theory.

This was done instead of signing a lasting agreement with the positively influenced extraterrestrial beings from the Pleiades whose interaction were to be built on ethics and morality, and the elevation of the spiritual (cosmic) consciousness of the earthly civilization, but the US administration and the military chose to sell their soul to the devil.

Here we have the reason why, for over 60 years, the United States has refused to disclose its communication with the destructive alien beings and deny all knowledge of their presence and interaction with them. Everything that has leaked out to the public about these extraterrestrial entities, they have rejected as “conspiracy theory” and has been denied as phantasies.

These destructive alien beings want to introduce through their earthly counterparts, representatives an artificially controlled social structure in Europe and in the rest of the world through the cover of “globalization”, and through chip-implants, mental control, surveillance, interception, censorship (limited freedom of expression), propaganda (spreading of false information) etc., the eradication and enslavement of the rest of humanity on earth.

Earth is heading towards the same devastation that occurred on the planet Betelgeuse in the Orion star system, if man does not wake up from his beauty sleep.

Our International Academy of Life Sciences and Total Human Culture, the “L’Académie Internationale de Culture Humaine Intégrale” (AIC) is the only organization on the earth that actively cooperates with the Intergalactic Federation of the Pleiades to raise the level of consciousness of the earthly civilization, thereby counteracting a total destruction of our planet’s natural resources and civilization along with various kinds of destructive measures.

We offer from our Academy every human being a “rescue plan”, which leads to emancipation from all kinds of negative influences and made up reality that the destructive alien beings and their earthly representatives have created and still create to prevent human cosmic development and making them into human robots – to obedient zombies.

Still, it’s not too late to choose way, but the clock is approaching 12:00.

Our International Academy AIC is a private, neutral NGO (Non-Governmental Organization) and free from all political and religious influences. It is an advisory organization whose task is to safeguard the cosmic (spiritual) development of the earthly human being and the preservation of the civilization.

The AIC is under the influence of the Intergalactic Federation of the Pleiades.

If we don’t choose the right path now, we will stagnate in our cosmic development.

Share
Previous Artificial Intelligence will enslave mankind even more
Next Save Civilization from Destruction!