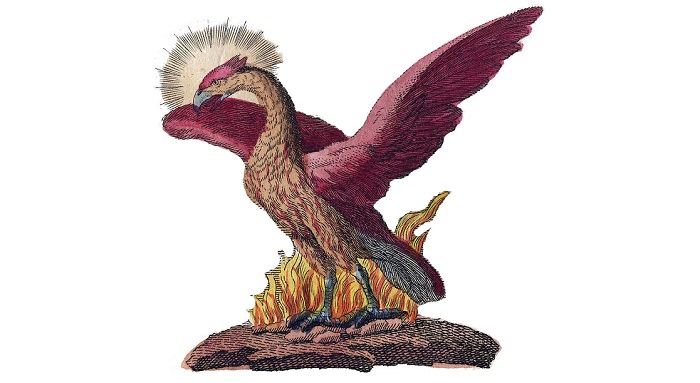 The picture shows the bird Phoenix. From the ashes in the fire rises the new Human Being and the new Society.

You have probably seen in the media or heard on TV how the development seems to rail towards a collapse of society. This takes place in some kind of unison, and as a matter of course – that it all will happen exactly like this. No human seems to be there uttering other views or any constructive ideas. International honors and awards are given to people who support the unison agenda to make it universally valid so that the destructive changes can take place quickly and easily. Everyone seems to be on the boat that with 100 percent certainty will sink to the ocean floor like Titanic.

Why is it like this – why does nobody intervene so that we can get constructive changes in the process?

The reason is that man of today has a too low consciousness to change the direction of the ship and make it leave the water surface and hover to the heavens, towards a brighter time.

Today’s man thinks only of himself, and is so self-destructive that if he only gets what he wants – then everything else is subordinate.

… but man chooses what he wants right now. This can be just the candy that is lying in front of him – and does whatever it takes to get it. But that is not enough – man chooses this and neglects the negative consequences. That man’s health should suffer is not interesting. Whether the candy would be carcinogenic to the individual himself, relatives or society is of no interest. We can clearly see the consequences of this thinking in today’s society.

The individual health becomes poorer, thinking becomes foggy, interest for development becomes poorer, interest in improving schools, wellness, health care, order, and all social institutions deteriorate, responsibility is minimized – only man gets his candy, only man gets what he wants – he doesn’t care about anything else. We can clearly see that this thinking exists to varying degrees in all people and in some even to the psychopathic level. Only we get what we want…

There are people building up things and people breaking down things…

Right now and for a few years ahead, it is precisely the people who break down society that govern society. For personal gain, anything can be sacrificed. It is perfectly ok to sacrifice an entire society…

But right now, this is the meaning. Society must be hollowed out fully and completely in order for something new to emerge in the light. Man must be extremely convinced about the destruction and all lying in order to change direction. This kind of institutionally leading people cannot come up with constructive ideas and implement them. We see right now in society that creativity and inventiveness of building viable systems seem almost non-existent – since today’s society must collapse. This is orchestrated by highly evolved development-guiding intelligences behind the scenes at the four- and five-dimensional levels. These intelligences now use lower developed individuals as catalysts. This happens quickly in order to enter the next stage in the earth’s history – the building of a new bright society, for liberated individuals, by liberated individuals where the soul power is intensified and the negative mind power has declined, i.e. contrary to the situation of today.

The individuals who today are breaking down the society and are lowering the Titanic to the ocean floor can never be the ones who build a society. The people who are building a society are now waiting will get more water on their mills to start building where human evolution is central, i.e. not today’s human degeneration towards the animal level. We are now going to get rid of all the animal intrinsic traits we humans have, which we for millennia have perverted in order to be able to see through them and making us elevate our consciousness. This era will soon come to an end. Now we will evolve into higher evolved cosmic people and leave the human animal kingdom for good.

A large part of the population will not make it because of their negligence that they have inflicted on themselves individually, and which also sometimes has been instituted and legislated, i.e. through medical killing, miserable home situations, junk food, statutory poisonings of all kinds, everything that has happened to destroy the individual and society, taking the society to the bottom … etc… This negligence will not come to exist and permeate a society, but only now because it is linked to man’s human animal consciousness, his low social development, evolvement.

The way right now leads straight down for the majority of the earth’s population. It’s like a virus that dims most people to varying degrees. Some people who are beginning to understand what is happening cannot initiate change, because the resistance is too massive from everything and everyone.

We can clearly see that today’s decision makers cannot change the direction of the ship at all, but only lower it to the bottom of the sea, which is precisely their task, their destiny. We others can only watch…

How many constructive solutions do we see? How many are mentioned in TV or in the media? – None – none at all. Everything we see is colored by destruction to varying degrees. Destructive measures are given medial space directly and are made to appear as something good … to bring with them the great mass on the sinking ship – people who are aping and spreading the information further of how sound this view is for society to be lost faster – since precisely that is happening.

Once society has reached the bottom, then the economic system is bankrupt, the abuse of power is maximal, the injustices are maximal, the human beings most distorted, everything has been put on the edge … only then when everything is in ruins, constructive building can take place with light and positive creativity – when the dark forces begin to give way to light – then evolvement will take place in all areas, levels, in man, animal kingdoms, society, science, resource distribution, harmony … in all areas.

… But what we can do is start working for a positive development by starting to work with ourselves to develop a higher soul dominated consciousness, i.e. no new-age or so, but just start working to let a higher qualitative quantum consciousness become a conscious part of us … become us …

The darkness will give way for the Light … it will turn soon … but first everything has to be put on the edge … be graveled … unfortunately many may think … but the turn will take place and from the ashes in the fire – like the bird Phoenix, man will rise and the sleepless sleep will give way to insight – soul insight … to what man really is in his essence – when the shadows have been worked off by the cleaning sound stream (the word) and examined by the soul, in those who really want this.

Our future will be bright!

Get an inspirational evolutionary boost in the book “From Barbarism to Super Consciousness“.

Share
Previous Man should be healthy
Next Carbon Dioxide Hoax, as a warming agent