Your destiny you create here and now!!! 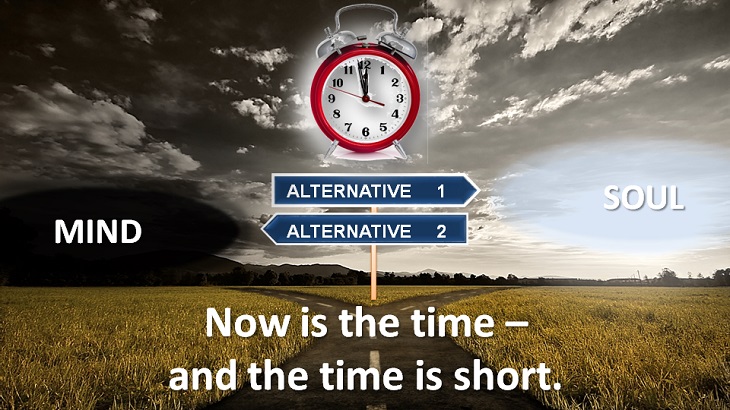 Many people routinely believe that some higher power that they call GOD or GURU (Teacher) shapes their destiny. The individual puts all his faith in this so-called DIVINE POWER that it controls and manages their life and destiny, but also that the same power creates galaxies, solar systems and planets.

From a metaphysical point of view, it is about two different energies: SCALAR WAVE ENERGY and ELECTROMAGNETIC ENERGY.

Pleiadians call this energy Source Energy. This energy is life-creating, life-sustaining and life-dissolving.

In the Christian doctrine this energy has been called: SPIRIT, SOUL ENERGY.

The scalar wave energy (soul energy) is unlimited and omnipresent in space, while the mind energy is form-bound, limited within space.

Knowledge alone, knowledge of these two energies is not sufficient to be able to understand life as a whole.

This phenomenon must be illustrated, experienced within ourselves.

Christ meant this when he said: the realization of God can only take place through self-realization.

This means absolute harmony between man and the diversity of creation. This can only happen through total union, fusion between the Soul Consciousness (source consciousness) and Mind Consciousness (manifesting consciousness). The mind-related consciousness is the foundation of the earth’s Homo Sapiens, which means the ability to think.

This in turn results in: the intellect, speculation, notion of life, the diversity of creation.

Man through his five tools, the senses: sight, hearing, touch, taste, smell experiences everything around as the only true reality.

The human being has two more tools at his disposal: telepathy (idea-transfer) and Intuition (higher perception).

But the earthly man has not yet developed these two tools or properties.

One should not confuse Intuition with Instinct or so-called gut feeling. These latter belong to the mind’s lower qualitative part of perception and interpretation.

Only when man has access to all his seven tools can he understand cause and effect, action and reaction. Without these latter two tools, man cannot comprehend the multifaceted nuances of life as a whole and continues in the dark and suffers for his unconscious deeds.

It takes a complete Illumination, a spiritual or soul-influenced awakening, consciousness to understand life, creation as a whole.

In order to achieve a higher qualitative soul or source-related consciousness experience (self-realization) and gnosis (knowing, knowledge) are required.

Only one of five people on earth today has access to soul (self) related consciousness.

The other four are programmed robots that follow their agenda, their program completely automatically with so-called sheep mentality. They follow everything that the (MSM) mainstream media, leaders, decision makers, government officials or so-called experts say or assert without investigating, questioning the authenticity, the truthfulness of what is being said or asserted.

Here we have the ongoing Covid-19 scenario as a good example.

“If Christ (the Source Consciousness) was born again and again in Bethlehem, in Israel, and not in you was born, you do not reach Sach Kand (the home of the Soul); you steer to Calvary in Jerusalem in vain only your path, as long as its cross is not raised in you again”.

One ship goes east, another goes west
and the same wind drives the two;
It is the shaping of the soul, not the journey of the wind
that decides the path they go.

And like the wind of the ocean is also the power of fate
when we travel the ocean of life;
It is the shaping of the soul, not silence and storm
that gave direction to our life.

By letting the spiritual consciousness break through the waking consciousness, one becomes fully the noble, brilliant man (Aryan) who will characterize the New Age, (Golden Age) civilization on earth.

To become an Aryan, noble man, you must break free from the constant influence of the mind; begin to live a more qualitative life than has been done so far. You engage in daily guided meditation that is connected to the pineal gland in the forehead region according to the AIC instructions. You read the Unifier’s literature for guidance, which is important for uniting the mind consciousness with the soul consciousness instead of engaging in different kinds of teachings and statements that divide instead of unites.

The shift – the change that many of you have asked for has already begun.

As we earlier mentioned, our planet Earth as well as our entire solar system entered the New Age at the winter solstice on December 21-23, 2012, when many believed that the earth would go under. What really happened was that our solar system crossed the equatorial line in our galaxy and entered a giant photon belt around the central universe, the central sun “Alcyone” in the Pleiadian planetary constellation. This astronomical event occurred after 26,000 years, when our solar system had passed 12 zodiac constellations. The age of fishes was the end of these earlier ages and now a new era has begun. The New Golden Age will lead man forward in the cosmic spiral of evolution.

A new consciousness in a new age is a necessity for the survival of our civilization.

The first step is to restore the symbiosis between man and nature.

The state today of our planet Earth and our civilization is not sustainable.

The earthly civilization (man) is under the influence of two different qualitative energies.

One of these is a fear-based energy network (field) of fear. The second is a higher quality energy field that is filled with unconditional love (harmony), peace and the pursuit of unity, well-being and freedom.

In every moment you have the choice to either enter the fear-based energy field or the higher quality, harmonizing and fusing (uniting) energy field that emanates from the central universe, the central sun in our galaxy, via our own sun.

No matter which of these energy fields you allow yourself to be influenced by, everything happens much faster than before. What used to take about 10 years before now happens in about 1 year.

It is important that you focus on which of these two paths you want to follow.

Either you turn inward through our guided meditation and work on your intuition and become connected to the Source. You begin more and more within you to feel true love, wisdom, freedom and togetherness. This is the only true reality in creation. The rest of the population will instead turn outwards as they have been used to so far.

Everything else is illusion, perception through your five senses: sight, hearing, touch, taste and smell.

In the following newsletter, we will teach you about your senses and how they mislead you and give you a false image of yourself to keep you in this 3D world’s illusion, unreality – this external existence.