True Gnosticism is the Source of all Science

Gnosticism has been associated with secret teachings and mysterious people.

Gnostic writings are usually written with language formulations that are impossible to understand for an uninitiated person, whose consciousness usually is on only the 3D intellectual level.

Gnosticism comes from the SUN THEOLOGY, instituted by Pharaoh Akhenaton in about 1300 BC. We have described this in the book “The World Doctrine”, which is available in both Swedish and English and can be ordered from Amazon in the UK and US. 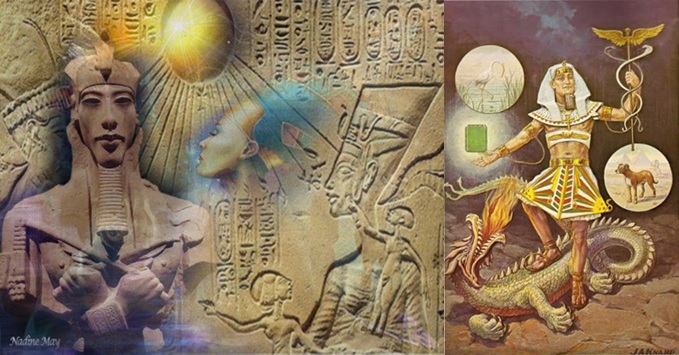 The Pharaoh Akhenaton originally came from Sirius A and made his first human incarnation on earth about 1300 BC. Therefore, his physical body was fragile (weak). It was AKHENATON who introduced the term “GOD” and “CHRIST” for the first time on earth. Prior to that, nobody knew about these names.

Pharaoh Akhenaton was a true Master Teacher and a living example of spirituality and ethical-moral living. His task was to introduce the SUN THEOLOGY, i.e. the theology of the highest God in our solar system, THE SUN. Pharaoh Akhenaton was opposed by a destructive clergy who worshiped and served SATAN, THE DEVIL – the Draconian destructive power behind all wars, all devastation, slavery, torture, persecution, etc. This force or power today also represents the ruling power on our planet. But its domination will soon come to an end.

The Pharaoh Akhenaton saw what the AMON-clergy was doing and therefore he decided not to allow them to dupe the people. But the people were engrossed in such low consciousness that they didn’t see the clergy’s purpose.

In 1300 BC, the Pharaoh Akhenaton taught the Egyptians about unconditional universal love, truth and brotherhood. 2000 years before Muhammad, he taught that there is only one GOD and it is “THE SUN”. 3000 years before Darwin, he taught about “One God” that permeates the whole creation and is omnipresent.

Pharaoh Akhenaton was a true Gnostic who wanted to reform the entire Egyptian religion and introduce the true concept of God that was about the Ra (the Sun). He declared that “the Sun” constituted the highest deity, the power of Christ – the Soul, the life-giver of the universe, and not the self-appointed gods (the so-called lower standing four-dimensional subtle astral beings), who the Amon Clergy believed in and worshiped, who they prayed to.

He taught that the SUN was man’s highest GOD and that they had access to this Deity, Sun Consciousness within themselves.

During his 17-year reign, Pharaoh Akhenaton clarified that religion and clergy had no function to fill in society from a cosmic development point of view. Rather, religion and clergy constituted an obstacle to human and social development. The clergy didn’t have access to the true knowledge, the Sun theology, the “Gnosticism”, knowing, knowledge, the insight of the innermost essence of the Sun – Soul, which is the CREATOR, MAINTAINER, and the DISSOLVER of all life in the vast universe, the cosmos.

He taught the people to stay free from the influence of the negative, lower qualitative powers, draconian powers and the associated beings that the clergy were associated with. This was the only possible way that could lead man to be God’s image.

God said, “Let us make man in our image, after our likeness. And let them have dominion over the fish of the sea and over the birds of the heavens and over the livestock and over all the earth and over every creeping thing that creeps on the earth. So God created man in his own image, in the image of God he created him; male and female he created them.” Genesis 26-27.

The Nordic Pontificate and the International Academy of the Life Sciences – Human Sciences, L’Académie Internationale de Culture Humaine Intégrale AIC, is the only educational institution on earth that through the UNIFIER has access to the source knowledge, the “SUN THEOLOGY”, which has later been renamed “GNOSIS”, GNOSTISICM – Knowledge about the Source of Truth, i.e. How we Know what is Right. True Gnosticism (knowing of the true nature of life) is about man’s relationship with his true origin, the Original Source, First Source, Central Universe – the implicit (folded), the unmanifested part of creation – the Supreme Godhead, Creator, Central Intelligence, Creative Power behind the INDIVIDUALIZED SOUL, “THE ABSOLUTE CONSCIOUSNESS”.

GNOSTICS is about how this primary original consciousness comes into expression through the Second Source, the 7th Super Universe, the explicit (unfolded) manifested order.

Gnosticism is not a religion but a life philosophy – life science based on knowing above blind faith, idolatry, imagination or speculation, although sometimes it has taken a religious expression.

Gnosticism has no belief about God.

The Gnostics do not believe in God as a personality outside man himself, which is mediated within religions.

Christ said: In our origin we are all Gods.

As a Soul atom, Seed atom, GOD is omnipresent.

GOD is dormant in the mineral kingdom, wakes up in the plant kingdom, moves in the animal kingdom and thinks in the human kingdom.

The Roman Catholic Church and the Lutheran (Protestant) Church have approximately 2.2 billion followers in the world. Only a few of these have understood the following words of God, Christ: as you want the people to act towards you, so you should also act towards your fellow human beings. Not even the clergy who have appointed themselves the ambassadors of God, Christ on earth and who preach the love of God have understood His message.

In the United States alone, there are about 247 million people who call themselves Christians.

Why do these people propagate for wars, start wars, wanting to have wars and constantly commit acts of violence throughout the world against their own Christian brothers and sisters?

Is this not “hypocrisy”?

People propagate for peace, while they at the same time spend billions on the arms industry in order to conquer and violate their fellow human beings.

The US annually uses ten times more money for rearmaments (weapons industry) than Russia does. The US wants to conquer and control the whole world (Create a New Roman Empire) while Russia is developing its defense against NATO’s attacks. In total, the United States has over 800 military bases abroad, while all the other countries in the world including Russia have about 30 military bases outside their own borders.

The Swedish government is trying to scare the Swedish people through false propaganda and make them believe that Russia is their enemy and that Russia plans to invade Sweden.

How can people at all who call themselves Christians, who claim to follow the teachings of Christ, believe in false claims and support violence, and commit acts of violence against their fellow human beings if not to support Satan, the Devil?

How can people be members of a church that blesses violence, destruction, devastation of life and at the same time they call themselves Christians – unless they are false prophets?

Everyone who applies the word of Christ needs to think about the meaning of the following expression:

“If anyone strikes you on one cheek, keep the other cheek to him, and if someone takes the robe away from you, do not refuse him either.” Luke 6:29.

If you don’t understand the word of Christ in the Bible and follow His ethical-moral rules, then you cannot call yourself a Christian. Then you are a wolf in sheep’s clothing.

No religious community on earth follows the words or the teachings of Christ. Both the Catholic and the Lutheran Church have since long deceived humanity and must be reformed if they want to become Christ’s followers on earth. In its present form, the Church represents an obstacle in man’s continued cosmic development.