Most of the more than 7 billion people on Earth today are threatened by destruction unless they choose the path of the Soul (Spirit) instead of the Mind’s. (2014-01-02) 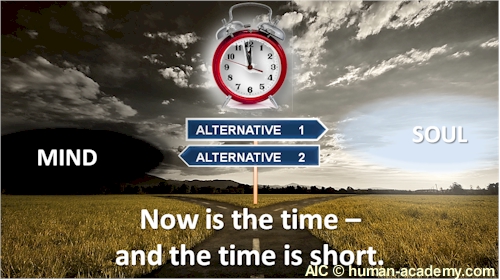 The Earthly civilization is on the brink of a global disaster if it does not change path. The intellectually related thought structure that characterizes religion, politics, leadership, education, societal development, individual thinking etc., must undergo an extensive process of change, a paradigmatic shift. Otherwise, most of the terrestrial civilization will in the coming decades go under because of natural disasters, epidemics of diseases, war, violence, anarchy, disintegration of society etc.

Increased neutrino influx from the Central Sun, Central Universe to our system will make everything man has so far has hidden, camouflaged, swept under the carpet to come to the surface. Everything so far kept secret will be revealed.

The human health situation will gradually change for the worse because of poorer immune defense, increased fear, anxiety, stress and improper way of life.

Epidemics of diseases will ravage the world and medical science will be powerless.

Only those who follow the Spiritual Master Teacher – Unifier and the Gnostic life science will be saved and included in the new civilization.

This is claimed by Sandor A Markus, Archbishop of the Gnostic First Christians of Antioch Syrian Orthodox Church for all the Scandinavian Countries and the Baltic States and President of the Northern Pontifical Academy (NPA).

Sandor A Markus urges the established Christian church to reform by recognizing “Gnosticism” as the Original Christian life science, before it was corrupted and banned and its practitioners were tortured, murdered, burned at the stake by the Emperor Constantine inspired Roman Catholic Church.

In 2012, Sandor A Markus announced on YouTube that the earth won’t perish on December 21 as many claimed, wrote books about and made films about. However, the earth and its civilization will in the beginning of 2014 undergo a process of purification before a process of adjustment will take place.

On the question whether his prophecy is a made-up story, he refers to the current world situation and the chaos that prevails at homes, in societies, in the world. According to him, man has violated all laws of nature, ethical, moral rules which constitute the basic foundation of creation.

Sandor A Markus has spent most of his present life preparing for the mission he received on the Hungarian Puszta (steppe) when he was 14 years old. A light being stronger than the sun appeared to him in broad daylight and urged him to leave Hungary and go to Sweden. In Sweden he was to lay the foundation of an International Centre of Life Sciences. He would reestablish true Gnosticism (the life sciences of the early Christians) which is based on science, knowledge about mankind and of the creation as a whole above blind faith, assumption, speculation, idolatry and sectarianism which today characterize the Christian faith. According to his explanation Gnosticism is about cosmic realization through self-realization.

Sandor A Markus came to Sweden when he was 17 years old.
He has published ten books in Swedish including “From Barbarism to Super Consciousness“, “A New Consciousness in a New Time” etc., His latest book “Saint Germain – the Mysterious Count who Never Dies” (Amazon, Smashwords) has recently been published in Swedish and English.

Sandor A Markus has compiled a World Doctrine consisting of about 6000 pages which is knowledge transformed down from higher dimensional worlds.

Sandor A Markus consciousness extends beyond what most can perceive, understand intellectually or imagine through our five senses.

Since 1993 when his first book was published he has held several lectures, seminars and workshops to thousands of people in cultural ecology and life sciences. He is regarded as the Spiritual Master Teacher – Unifier of whom seers have since long talked about will come from the Nordic countries. His task is to help the earthly man out of the chaos that prevails today. The prerequisite is that the individual himself is interested in emancipation and development.

According to Sandor A Markus there is neither a religious or political solution to mankind’s and the world’s current situation as long as man does not develop a higher qualitative quantum consciousness – a consciousness whose basic foundation is ethics, morality, respect and individual responsibility. This can be reached only through a specific Brain Development Program according to the CelesteMethod® developed by the AIC.

This training and development center is intended through online teaching and seminars to help people find their inner quality and understand life in its entirety, to see the causality behind every event, situation, and train the brain to an increased consciousness. Then only can man free himself from the constraints of the mind and senses and be part of the new civilization, the 5th in order which will constitute tomorrow’s civilization.

The AIC programs have nothing to do with mind-related mental training, mindfulness or the like to do because they don’t contribute to man’s cosmic development.

The AIC programs are about the “Science of the Soul” instead of the “Mind”, which to date has governed and misled people and contributed to egoism, lust for power, greed, vanity, lust, hatred, discord and sufferings of various kinds.