Sandor A Markus Autobiography (Part 5 of 7)

In 1981, I was initiated into Sant Mat (the science of the Soul) and Surat Shabd Yoga, i.e. Sound Yoga by the greatest Indian Master Teacher, Hazur Maharaj Charan Singh Ji, Dera, Punjab, India.

Maharaj Charan Singh Ji was educated as a lawyer and worked as such until 1951, when he succeeded his Master Teacher Sardar Bahadur Jagat Singh Ji Maharaj.

Maharj Charan Singh Ji left his earthly life in June 1, 1990. Three days before his biological death he appointed his brother’s son Gurinder Singh as his successor.

After my initiation into Sant Mat and Surat Shabd Yoga in Dera, India in 1981, I started my transcendental meditation focusing on the “third eye” in the forehead region.

I also began to study the Granth Sahib (Adi Granth), which is the Sikhs’ holy book and written by Guru Nanak.

I found out that Charan Singh Ji’s teachings in Sant Mat was the essence of the Granth Shaib.

The requirement for discipline and daily 1.5-3 hours meditation was mandatory on the initiate. Only few people in the West can implement this if they also would be able to live a normal family life with children, etc. Many of the initiates ceased to meditate when shut off from different kinds of experiences, and also because they had difficult to meditate for several hours a day and at the same time managing daily tasks. For many Indians, it was easier because they did not have to take care of their families as in the West. In India, it is the woman who takes care of the family.

I decided to reform Sant Mat and adapt it to the West and the future evolution of earth. Therefore, we developed a self-study and training program within our Gnostic Academy that is adapted to the Western needs, views, cultures and traditions. However, there is much for us in the West to learn from these great cultures. We must not forget that earth is entering a new phase of development that requires a completely different thought structure and commitment than what we so far are used to.

I know what I’m talking about in comparison to those not having experienced or having no life experiences more than what they have read and gathered through various literatures, gurus or master teacher teachings in India, Tibet, etc.

So-called paranormal (subtle, astral) experiences and communications do not give any higher quality knowledge or consciousness unless having access to any teacher who accesses such dimensions. This is because beings that reside in different regions of the astral plane themselves don’t access knowledge other than what they have acquired on earth, or have acquired in their respective worlds.

We all need a guide, someone who has personal experience and knows more than we do ourselves – otherwise our development stagnates from the point of view of consciousness.

It is quite common in the West today that we assume a role just because we have had some sort of paranormal experience or are in communication with various astral beings. But most astral beings that people on earth are communicating with, don’t know more than they did when they resided in their physical bodies, housings. However, they can testify that life proceeds without any interruption and that we are all travelers heading towards the same destination. Some have gone further on their journey, others come after.

I often hear people saying that we all have the same knowledge within us, and that we are all teachers and that we do not need a teacher, a mentor.

This is true with some modification.

The teacher’s task is to remind us of what we already know within ourselves and awaken the knowledge and experience that is stored in our subconscious field from past lives and experiences.
Since we have difficult to remember what we have experienced before and what makes us experience fear, anxiety, insecurity, hatred, anger, etc., in our present life, we need to have an experienced teacher, a master who can help us understand life, ourselves, why things happen in our lives and to help us back onto the right path.

We need to learn humility, respect, tolerance, consideration, etc., and get rid of arrogance, conceit, vanity, lust for power and selfishness of various kinds that make us believe we are better than other people and that we know more than the Master Teacher, just because our own destiny is more favorable in this life compared to many others and because we have experienced a few small glimpses of creation. The more we learn, the more we realize that the horizon broadens more and more and that we never reach its end point. Life is like a deep drilled well. We never reach the bottom.

Some call themselves experts in various fields, but access only a limited part of what happens. They see what is going on, but don’t know why. They know nothing about the reason behind.

It is like living in a bubble and not knowing what happens outside. At the same time we are afraid of leaving the bubble due to fear of losing the security the bubble gives.

This kind of people stagnates in their development and become pupils who cannot move up in the school of life.

Christ put it this way: Father forgive them for they know not what they do.

Love of our neighbor is based on understanding of our differences. I turn; the understanding originates in a higher qualitative consciousness, where we know the causal connection behind every possible situation. It is not the intellectual knowledge that is the most important, but to understand that all events, both individual and collective, are linked. Nothing is an isolated, independent event. Only when we understand all this and have learned how creation works in its entirety, then we are ready to don a Master Role. Until then, we have to resign ourselves to be disciples, students in the school of life.

Our International Academy for Life Science, A.I.C. has been established for this purpose to be a beacon, a guide to those seeking the meaning of life.

It is not our task to convince, but instead to guide and teach those who want to change their lives for the better, i.e. those seeking God-realization through self-realization. We cannot help those thinking they know everything or wanting to be victims and continue to feel pity for themselves.

Life on earth is a school and not a holiday resort for sunbathing and doing what one pleases.

We must all do our part if we want to change our lives and our environment for the better.

Without a shepherd the sheep are going astray.

Granth Sahib is the holy book of the Sikhs. It is unique in comparison to other spiritual philosophical writings of the world. It is written by the Masters (Gurus) themselves and not by followers as in Christianity.

The so-called “Holy Books” as the Talmud, Bible, Koran, Buddhist philosophy, Hinduism, etc., are all written by followers and not by the Teachers, the Masters themselves.

Granth Sahib is also unique in the way that it is the only spiritual writing involving not only works of the Masters themselves, but also of other higher conscious people of different faiths. Thus, all people around the world can take part of the Sikhs’ Scripture, and learn from it regardless of their origin, caste, religion or gender. The Scripture is more than a holy book to the Sikhs, and is regarded as the Sikhs’ ultimate teacher and guru of all time.

Granth Sahib is not worshiped as deification. Rather, you show the highest reverence for the words that the scripture is made of. The contents of the Scripture comprises hymns and verses that praise God, the Supreme Creator, The First Source, The Intelligence of the Central Universe, its greatness and love and longing for God. At the same time is described the contexts of human nature, his creation and history. 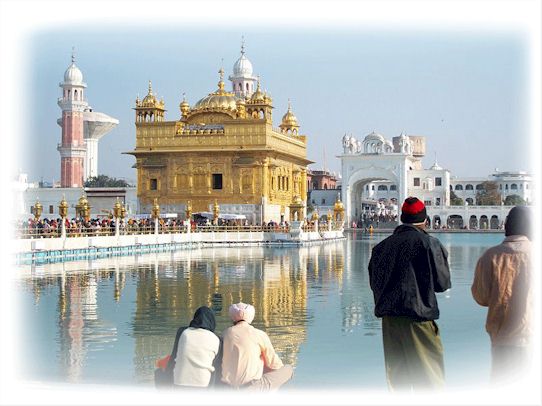 The Gurus did not write the message to the Sikhs exclusively, but to all of humanity as a whole. Its meaning is not to convert people from other religions. It rather tries to get people to open their eyes to things that prevent them from living in peace and tolerance with each other. The hymns strongly reject various forms of religious fanaticism.

Sikhism is a monotheistic religion that believes in an eternal God.

The Sikh philosophy was formed by Guru Nanak Dev Ji, who was the first of ten Gurus.

The word “Sikh” means “disciple” and “Guru” means “teacher” or the one who transforms darkness into light. He gave the explanation to the meaning of life and proclaimed the belief in an almighty God, with the purpose to let all men and women from different religions and cultures to live side by side in peaceful harmony.

“There is only one God. Truth is his name. He is the Creator. He knows no fear. He feels no hatred. He exists beyond time and space. He has reached enlightenment and not dying. He is experienced through the grace of the Gurus.” 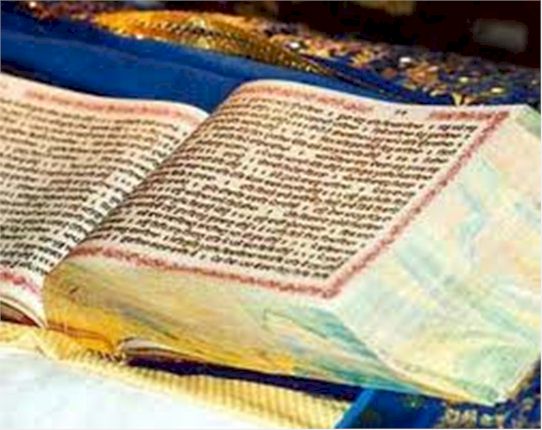 As a Sikh you live a social life where you are active and helpful in the society. Sikhism rejects the belief in various ritual acts such as living in celibacy. Instead, they believe in three golden rules:

The goal of a Sikh is to break the cycle of life and death (reincarnation), and to become one with God. This can be achieved by following the Guru teachings preserved in the Sikhs’ holy book i.e. Guru Granth Sahib Ji, while at the same time being able to meditate on God’s name. The ideal of a Sikh is to not bond mentally to materialistic objects.

There are five main emotions that a Sikh should avoid: lust, anger, gluttony, pride, and to attach to worldly things.